If you Google for "longest domain name" you'll find a lot of conflicting information. For example, you'll probably find more than a few sites that say that a domain name cannot be more than 63 characters. That's sort of true and sort of untrue, but to understand why takes some digging (figuratively and literally, as you'll see).

It gets pretty ridiculous. For example, at one time someone registered this silliness:

All of that except "www" is a domain name - subdomains of subdomains, all under "theinfo.net". To make things even more confusing, the person could have added another host called "peanuts" (or wahatever) and could have had "www" and "peanuts" served by different websites and most of us would think of www.all the rest and peanuts.all the rest as separate website domains!

Let's just ignore the confusion of website domains, shall we? Trust me, it's bad enough without that. For the moment, let's look at the definition of "domain name".

That's from RFC1034. So, if we want to get pedantic, that "theinfo.net" mess was a subdomain, not a domain. According to the same RFC, each component of a subdomain is limited to 63 characters, so THAT would be the actual limit of a domain name.

Assuming we're just counting characters, of course. What if we get into typography? An "m" is wider than an "i", so a 63 character domain name with a lot of "m"'s in it would be "longer" (wider) than one without.. silly? Sure, but the whole thing is silly, isn't it?

(63 characters when you take away ".com") tried to get recognition from Guinness World Records. Guinness responded:

This record is currently rested, which means that no one can attempt this record and become a new record holder. It has been rested because there is no merit whatsoever in this. It takes little to no effort and is similar to taking the largest number in the world and then adding 1 to it.

That's not accurate. You can't just go on adding letters to a domain name and you can't have an infinitely long subdomain. The same RFC plainly says:

To simplify implementations, the total number of octets that represent a domain name (i.e., the sum of all label octets and label lengths) is limited to 255.

I didn't explain "label lengths" before. Again, we turn to the RFC:

Internally, programs that manipulate domain names should represent them as sequences of labels, where each label is a length octet followed by an octet string. Because all domain names end at the root, which has a null string for a label, these internal representations can use a length byte of zero to terminate a domain name.

Given that the "theinfo.net" silliness adds up to 242 characters (subtract the "."'s) and has 11 components, that comes to only 253, so there are 2 characters missing somewhere!

Note: the original RFC for hostnames is RFC-952, which says (in part):

A "name" (Net, Host, Gateway, or Domain name) is a text string up to 24 characters drawn from the alphabet (A-Z), digits (0-9), minus sign (-), and period (.). Note that periods are only allowed when they serve to delimit components of "domain style names". (See RFC-921, "Domain Name System Implementation Schedule", for background). No blank or space characters are permitted as part of a name. No distinction is made between upper and lower case. The first character must be an alpha character. The last character must not be a minus sign or period.

That was modified by RFC-1123 to allow either a letter or a digit as the first character, but underscores are not allowed anywhere in names.

However (there's always a gotcha), that 253 character name might not work everywhere. RFC1123 says that

Hard to say, isn't it? One quick check is to ask for an "mx" record. A subdomain doesn't HAVE to have an "mx", but if it does, we know it is a subdomain and not a host.

Back to the contenders for one last look. We have The World's Longest Single Word Domain Name! which perhaps does deserve Guinness as it is a real place name (created for publicity reasons long before the Internet). Although "llanfairpwllgwyngyllgogerychwyrndrobwyll-llantysiliogogogoch" weighs in at only 60 characters, I think it deserves recognition.

Then we have this, which is billed as "The world's longest alphabetical email address": 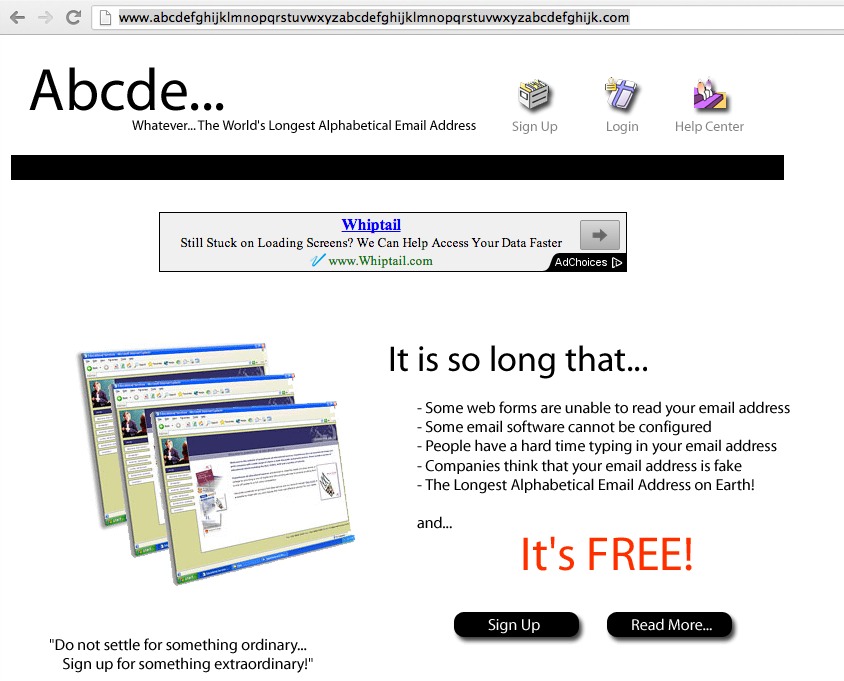 Remember the "would" and "should" of RFC1123 above? Point taken.


Generally, old media don't die. They just have to grow old gracefully. Guess what, we still have stone masons. They haven't been the primary purveyors of the written word for a while now of course, but they still have a role because you wouldn't want a TV screen on your headstone. (Douglas Adams)