This is an inexpensive ($199.00) "security" web cam for your home. I put that in quotes because it's something that might function as that, but really is more suited to remote monitoring. However, because it records and stores 24 hours worth of video that you can review, you could possibly catch someone walking toward the camera before they picked it up and stole it.

That clip would be available to you from an iPhone or iPad app and clips can captured and emailed or posted to social media like Facebook.

If all you need is a picture, you can stop the playback and snap a screenshot. That's where this came from. 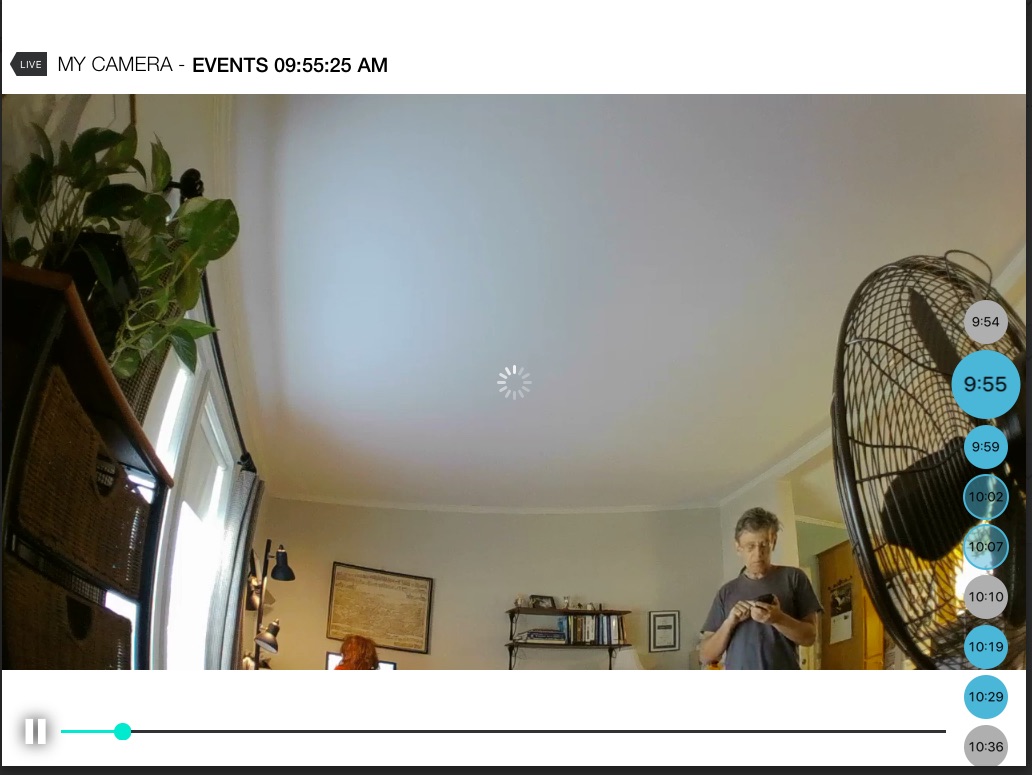 The camera has a rechargeable battery that supposedly lasts for twelve hours, so you could easily take it away from its charging base and temporarily put it somewhere that doesn't have nearby power. They didn't scrimp on the charger cord, by the way: it's a 10 foot USB cable. I tried it uncoupling it twice and found that it barely lasted 4 hours. By the way, I measured its power consumption and found it should use less than $2.00 just sitting there.

The "Day Brief" (not visible in the picture) is everything that has happened since midnight squeezed into a 30 second video. You cannot slow it down, but you can stop it. You don't need to slow it down because you can go back in time with the regular clips anyway.

Note that it is not the past twenty four hours. It's since midnight, so if you tap that at five past midnight, you'll see five minutes compressed into thirty seconds. You can still go back in time through the clips; those don't reset at midnight. But those aren't necessarily 24 hours either: the camera selects "interesting" segments from your day. According to the website, it learns what's interesting. I assumed that might mean that hours of me sitting at my computer typing would be removed, but it's more than that. For example, the camera caught me doing pushups. I actually did 30, but if I go back to that time slot, it shows me doing twelve - it filters out repetitive movement as well as non-movement.

Initially, the camera did not record sound. A reset and firmware upgrade fixed that. 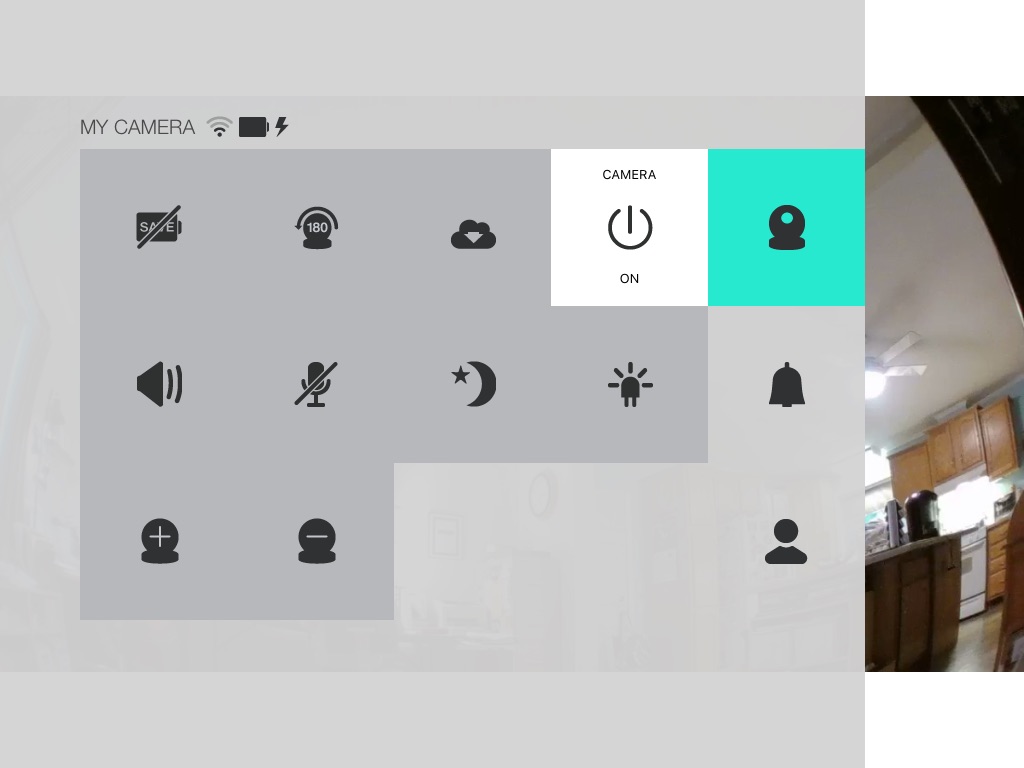 Swipe right to see more controls for the camera. It's not completely clear what all of those controls actually do and (so far) there is no on-line manual to refer to. I'm sure that will change soon also.

First at top left is "Power save" on/off. I've found nothing that fully explains that yet; will update when I do. Next is the 180 rotate I mentioned above - I'm really confused by that one. It does rotate the lense, though I don't see the value. When it is sitting upright, rotating only seems to point it at the ceiling. Mounting it sideways seems to just turn the picture sideways - I don't get it.

That's so you can mount it on the ceiling! 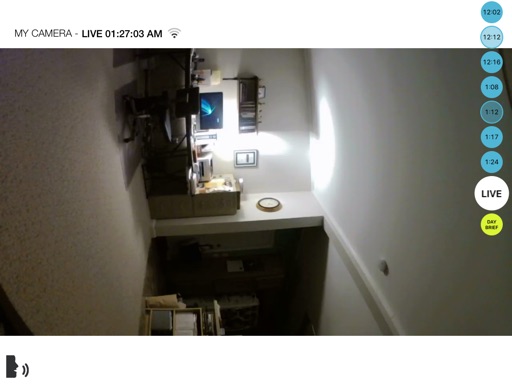 That cloud icon with the down arrow is for updating firmware. Next to that is on/off, which obviously doesn't turn off wi-fi, just the camera recording.

The speaker icon turns the speaker on and off, but the microphone button has three settings and it's not clear to me what the other two do. 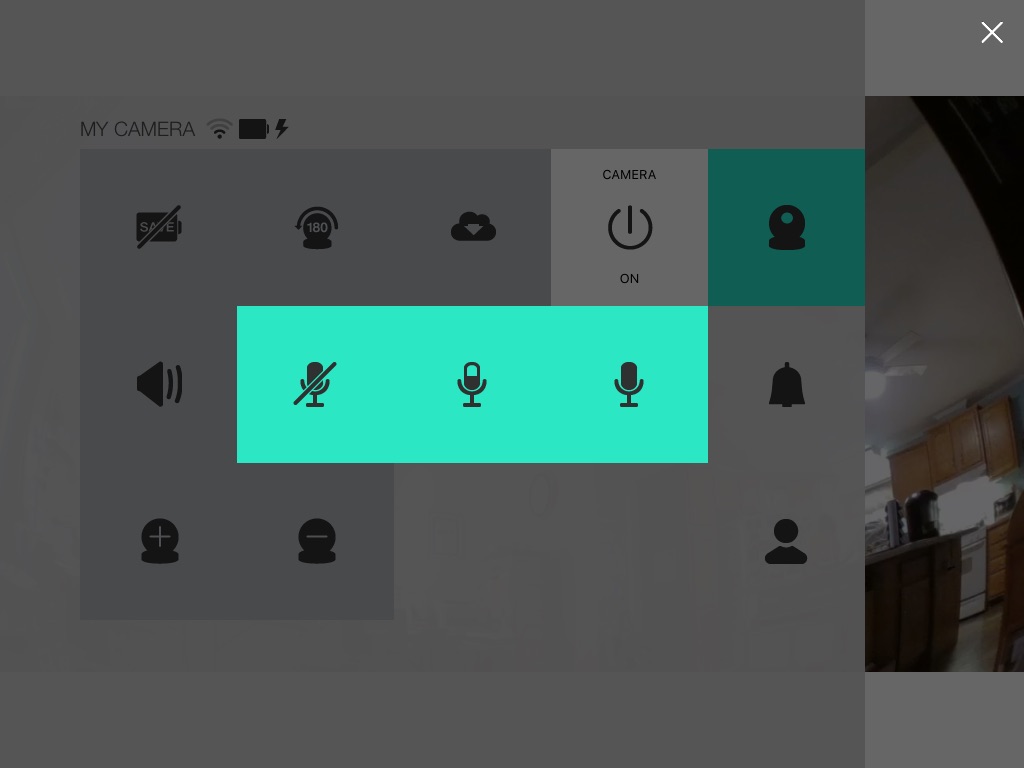 They adjust the sensitivity.

The moon turns night vision on and off. I tested night vision; it works well. The icon to its right turns the LED activity indicator off. When on, it flashes if someone is watching.

The "Add/remove camera" button (bottom left plus and minus in camera icons) is what it sounds like. You could have one of these in every location in your house. I'd like to have another one at our vacation home.

Activating the Alerts (the bell shaped icon) sends you IOS alerts when it detects activity. That could be very helpful or very annoying, though I found that even when I am at home and doing things that the camera sees, it doesn't alert constantly. When we went out for six hours, leaving the house empty, it did sent an "Activity detected" alert the moment I opened the door to walk back in. However, when reviewing the recordings the next morning, I was very surprised to see that it did not actually record me entering. That seems odd, but it has not happened again: it has always caught me coming in.

Finally there is People. That lets you change your password, logout and redirect to the support site.


I love deadlines. I love the whooshing noise they make as they go by. (Douglas Adams)