As anyone who knows me well will attest, I'm not what you'd call "mechanically minded". Give me a screwdriver and I guarantee to strip the heads of anything I touch, and you just do not want to know what I can do with a hammer - trust me, it can get expensive.

Other people will look at some device and immediately see how it "must" come apart. I understand that; I often feel the same way about software: I look at something that's not working right, and I know what it must be trying to do behind the scenes, so I know where to look for the problem. But hardware..

Well, that's a different story. For example, this morning I wanted to pull the hard drive from an old Dell Optiplex SX270 I have hanging about here. I looked the darn thing and saw that someone else had been this way before: all the screws had been removed from the case.. but as it turned out, that was a complete red herring. You don't need to touch a screwdriver to open this puppy. Well, maybe one, but I never saw it in, so I'm not sure. You do have to be brighter than I am, but just in case you are equally challenged, here's how you open a Dell Optiplex SX270.

See that green button? You push it one way to open the top cover and the other to get at the hard drive. The button itself isn't hard to push but you may need a fair amount of strength (as in using two hands) to push the top cover back. This picture shows the cover pushed back, after that you can just lift it off as shown in the following picture. 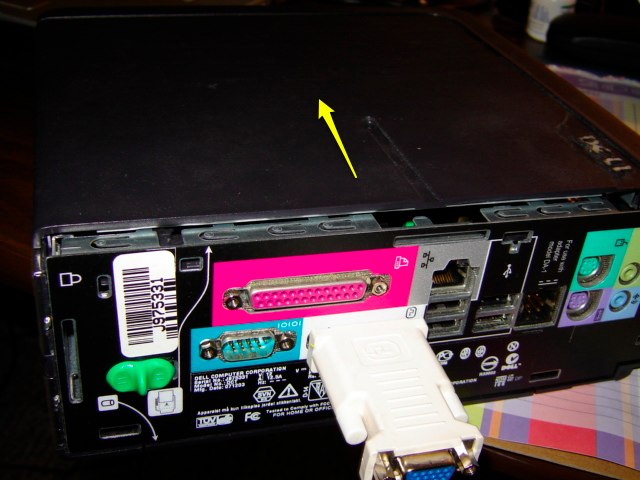 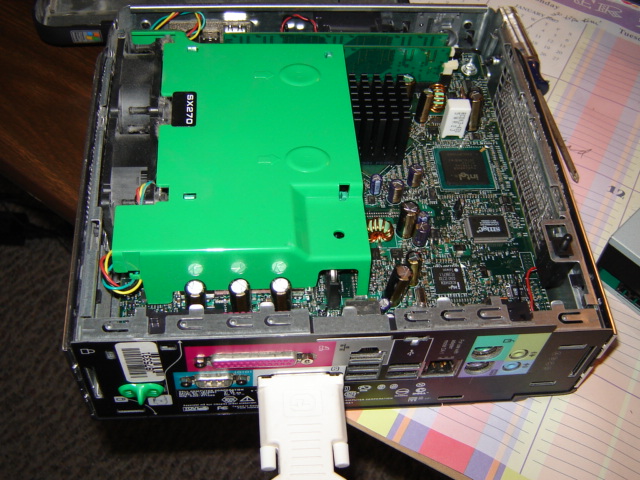 The hard drive cover is easier - it just lifts up. Flip the machine over and push the green button the other way (toward the outside case) and lift the cover open. 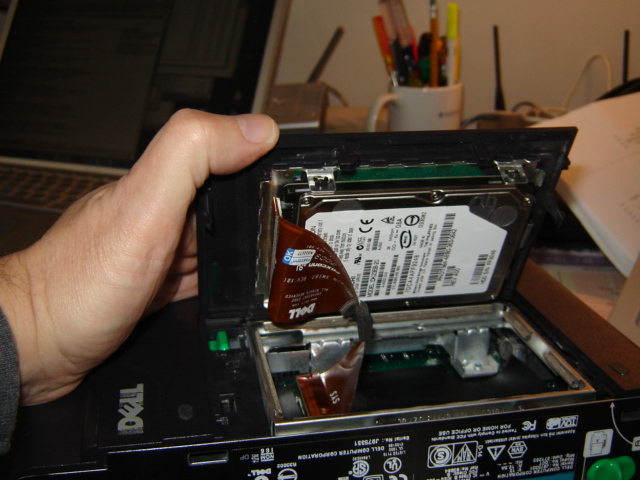 I can't recall the brand, but I once had a machine that baffled me so much that I had to call the manufacturer. It turned out that you needed to press a certain point on both sides of the case and then yank.. I never would have figured that out!

Oops.. now I can't remember what I wanted that drive for..


Home
->
Miscellaneous
-> How to open a Dell Optiplex SX270 Computer


I have had a lot of trouble with Dell cases, and some of the generic boxes. So far, Apple, and IBM are the most intuitive I have come across. I don't understand why they don't put a sticker, with an error mentioning what needs to be done to open the case, because often times, the manual is no where to be found.

The IBM machines I have are all tool-less, and the Mac Pro I just purchased is tool-less as well. The Mac Pro is a nice machine :-)


I have a compaq box that is like that, were you squeaze on the sides then push it back. It's a desktop-style case (short-n-wide rather then tall-n-skinny).

My parents have a Dell mid-tower were you have to take it and lay it on it's side and there is two buttons, one on the top, on on the bottom, were you have to press. Took me a half a hour to figure that one out since the top button looked like decoration, which kinda went along with the 'ugly flat folded plastic' motif they had going on the front of the case.

They probably figure that if you can't figure out how to open up the case, then you realy have no business being in there. They don't want Joe blow openning it up and trying to pry off the cpu heatsink with a screw driver before giving up and sending it back to them under warrentee.

Of course other things are designed like that. Toasters for one.. Another irritating example is modern automobiles..

I now think they are designed to speficily discourage people from trying to work on them. I think that Volkswagon (or other European car company) even made a prototype automobile as a excercize to specificly cater to women a couple years ago. Utterly bizzare. They figured that since automobiles are designed and tested by mostly men that they are missing some basic concept that may appeal to female buyers.

Well you've heard analogies dealing with cars were if cars were like software then Microsoft's car would have the hood weilded shut. Well.. This car had NO hood. They figured that it made females feel more secure about their automobile. They liked the idea that if it broke down that they would just have to call a mechanic or dealer up rather then feeling obligated to stand by the side of the road and try to look at the motor in a futile attempt to fix it.


I personally don't like tool-less entry. All screws work the same, which means I can almost instantly get the machine open with my trusty battery powered screwdriver. However, when the manufacturer starts getting cute with push buttons, latches and levers (Dell is notorious for this nonsense) I get irritated in a big hurry because I have to sit there and solve the mechanical riddle of how to open up the box.

Speaking of Dell, you couldn't give me one of those things, even if served up on a silver platter by Eva Longoria in a nightie. Dell is to the current PC market as Packard-Bell was a decade ago: a producer of cheap*\***.


thanks for the pics and info :)


the case was really pissing me off and I didn't have time to keep screwing around trying to open it up, thanks for the tip, saved me precious time.

You sound like me.. I almost took a saw to one case before I found its secrets.

Lol, I like just to get parts from old towers, so i love finding new ways to open it, whether it involves fireworks or a chainsaw...

Thanks this helped alot,i was having trouble in finding how to get the bastard open but the pictures helped, also the green switch has to be pressed when opening the back section or has to be holded down i found. with regards James.

I just noticed I still have that puppy under my desk. Haven't used it for anything in quite some time, but it's there :-)

Thanks guy! Without you we would have been sitting around all night wondering how the hell to get this dell open.

I still couldn't figure out how to get the &%$#$! thing open. So I put it on a drafting table, and started to connect it (I wanted to know how much memory it had in it). It proceeded to slide off and fall on the floor (rubber mat on carpet). Cover came off! (don't try this at home). Anyway, for us really dummies, the cover slides back (toward the front), then comes off. Actually easy, once you know how. Thanks.

Oh, yeah, it can be VERY tight.

Look at the second picture to see the direction it moves.

hi does the sx270 use a sata connection?

Doubt it - that's rather old. But I'm sure you can find full specs if you Googke "sx270 specifications "

Or, you could try opening one, which I understand can be accomplished by using explosives, a chainsaw or if those fail, dropping it on the floor. <Grin>

Thank you - such a great help, and saved me from going wild with the screwdriver!

Wow, that was easy. We have been trying for a month to get this thing open. Boy, I feel silly now. Thank you so much.

Thanks for your description. Together with the the pictures it was a great help.


When someone says: "I want a programming language in which I need only say what I wish done", give him a lollipop. (Alan J. Perlis)