I have never been a fan of inkjet printers. In fact. my general advice has been not to buy them because they are far more expensive to operate than laser printers. These multifunction things have even more to dislike: if you lose part of the functionality, you are going to lose it all while it is out for repair.

Not that these things are worth doing much repair on, anyway. Considering what it costs to replace one of these, you can't afford to spend much at a repair shop. For what an hour of time and a part or two is likely to cost, you'll already be at the replacement price.

Your biggest investment will have been in ink, so when that replacement day comes you'd like to look for the same model so that you can use any ink you have still unopened. If nothing you can find uses your old ink cartridges, that's more money wasted.

And yet, here I was, setting up a Brother MFC-J615W printer I bought just before Xmas.

You mean other than the desire to spend money? Well, scanning was part of it. My old flatbed scanner was long gone and although I don't need to scan all that often, the need does come up now and then. I've handled it by faxing things to my fax to email gateway - a bit clumsy, but it does work. Or it did..

We kept an ancient Canon fax machine around for that and the odd thing that needed to be faxed to somewhere. Its ability to receive faxes disappeared many years ago and in the past few years it began adding a lovely vertical streak to everything it sent, but it was good enough for most of our needs.

Well, until it stopped working entirely, that is. Can I complain? Hardly: it was eight years old! I think we got our money's worth.

Finally, there is color printing. That's a rare need also and it is mostly photos, so I just do it over the Internet and get nice color prints. But it isn't always photos; once in a while we've wanted something in color and haven't been able to do it.

So when I looked at everything, it seemed like it made sense. Maybe. Well, it wasn't an absolutely insane thing to do, even if part of me was still insisting it was.

In spite of lingering misgivings, I bought the thing. And then I let it sit unpacked for a week or more because I was having second thoughts. I thought it all over one more time and decided to keep it.

Brother could do a better job with its setup manuals. Yes, I was able to get this set up and ready to go, but the instructions aren't all that clear. I could easily see someone getting confused and frustrated by this part. I figured out what was packing and what was printer and what went where, but I'm not sure my wife could have done this. It's just not well done.

The point of getting a wireless printer was that I want to install this across the room from everything else on our network. I could run a wire along the walls; it would be behind furniture so it would not be visible, but why bother?

The materials packed with the printer strongly recommend doing a manual setup of the wireless connection at the printer itself. This is unusual: most of these devices that I have set up in the past want you to connect by USB or Ethernet and do the wireless setup from your computer. You then disconnect and put the printer where you really want it. I was a bit surprised that Brother didn't recommend that.

As you can see in the photo below, Brother suggests that you can just program it in without a physical connection. They do warn that you need to know your SSID and password if you have one (and you should), but the idea is that you can do this right from the printer control panel through their Network Setup Wizard. 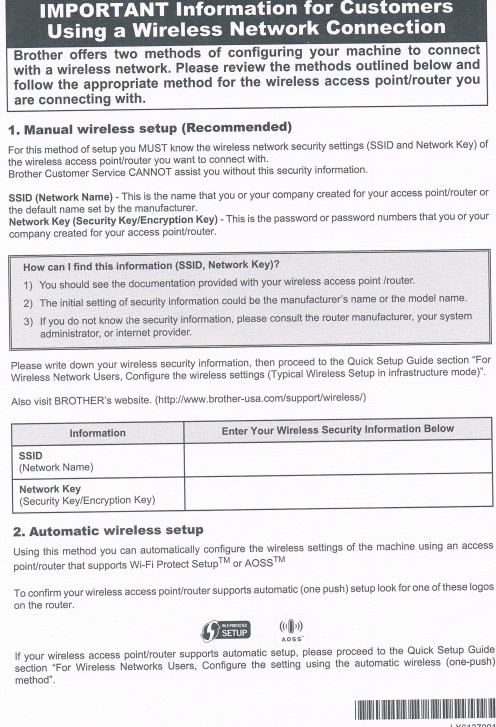 So, why not? I tried it and it found my wireless router along with several of my neighbors. I selected mine and input my password. The printer seemed to be doing its thing, but ultimately it failed.

I tried it again. It still failed.

So I picked the printer up and brought it to where I could plug in an ethernet connection and installed the wireless information that way. Same SSID, same password, same WPA/2. This time it worked. I disconnected the printer, put it where I really wanted it and confirmed that I could print to it from my MacBook.

Yeah, I know. That makes no logical sense at all.

I found another problem the next morning. I shut down all power at my desk to save electricity, but did not cross the room to unplug the printer. In the morning, I turned on the router, switches and everything else. The printer thought it still had its ip address, but in fact nothing was able to talk to it until I unplugged it and rebooted it. Oh, well..

My Kill-A-Watt meter says this printer draws about 5 watts when it is "lit up" and not asleep. After it dozes off, that drops to 2.4 watts as the display goes dark.

That's not much, of course, but I hate any unneeded electricity use. I'll run a separate extension cord over for this so that it can power off with everything else.

I was actually mildly impressed by the printing speed. I don't mean that it was super quick, but I've certainly seen much slower printers. I was using laser printer paper, so the quality wasn't all that great with photos, but it was fine for text. So far, I was happy.

I installed the software on my wife's Mac Mini and also put their iPrint&Scan software on my iPad. I confirmed that I could print with both, though the picture I printed from the iPad got cropped oddly.  I figured I'd look at that anomaly later and pressed on.

I next tried a fax to my email-fax service. At first I thought it was going to fail because it seemed that it was trying to dial before it had dial tone, but in fact the fax went through and I had it in my email a few minutes later. So far, so good.

I won't be receiving faxes with this, so I set that to "Manual", but I noticed that the printer still wakes up from sleep whenever the phone rings. That's a small and very minor annoyance.

I took their pretty purple setup disk and copied it. You can see that in the photo above, though of course it has lost more resolution because I took that copy and scanned it back to my computer. Well, to my wife's computer, as you will see in a moment, but the point here is that it made a decent color copy and has the ability to enlarge which we sometimes need. We still have a Sharp AL-800 for black and white copies. We'll use that for most of our copying needs, but copying in color does come up sometimes, so this is good to have.

When you install the software, it also offers you a chance to give your computer a unique name so that when you go to scan, you can easily pick out your computer from a list.

But the concept is good. I put something into the machine (the printer, that is), pressed "Scan", chose "Scan to file" (which would be better named "Scan to computer") and saw my Macbook and my wife's computer as choices. I chose my computer and apparently it was talking away, but after a short period an error came up on my screen: MTW005, whatever that is. 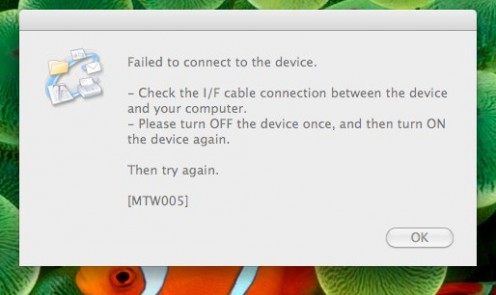 After pressing "OK" on the first error, another quickly followed (CC031), suggesting that I try again and restart things if that failed. I didn't know which suggestion to follow, so I tried them both, but I still got the same errors.

I next tried it to my wife's machine and that worked perfectly. I tried the iPad software and was able to scan to it. The iPad works a little differently: you initiate the scanning from that iPrint&Scan software rather than at the printer, but it worked perfectly.

Obviously something went wrong at the MacBook specifically. Both Macs were running current operating system software, so that couldn't be it, but my machine does have a lot of other stuff on it.

I tried reinstalling the software. No help. I tried re-running the DeviceSelector tool, which is found in /Library/Printers/Brother/Utilities/DeviceSelector, but that did nothing useful.

I removed /Library/Printers/Brother, rebooted, and reinstalled the software. No change.

This is another place Brother could have done better. I had a fairly short wait to talk to someone who turned out to be someone only know Windows. She was very pleasant, but she had to put me back into the queue for the Mac group. Shouldn't the automated attendant have asked me what system I was calling about while it was asking the questions it did ask? Oh, well. After a fifteen minute wait, I had another pleasant woman who listened to the symptoms and asked me to try using the Brother Control Center.

I had not noticed that Brother had added an icon to the top of my screen. I have a lot of stuff up there now, so adding one more tiny icon is easy to miss.

But sure enough, there it was, and when I opened it, it showed me the Brother Control Center that she wanted me to try.

I threw something into the scanner and told it to scan an image.

Immediately the MFC-J615W came to life and a scanning progress window appeared on my screen. Seconds later, the image I had scanned opened up in Preview.

Well, that was easy enough, wasn't it?

I told the nice woman that this method was fine with me - I had no problem using this rather than selecting my machine while standing at the printer. She said I could certainly do it that way, but now that we knew that scanning actually works, she knew that the cause of my problem was either a firewall or vpn software in use.

Ahh. I have both.

So, that's that. I can change my firewall setting and/or disable the VPN when I want to scan or I can just use this Brother Control Center. I think I'll just do that.

I originally published this at another site and have removed it from there to have it here.


You can't do it unless you can imagine it. (George Lucas)