This is the answer to Shell Bashing

As we know, Kevin wanted his script to run when he logs in. If he had been running /bin/sh instead of bash, he would have called his script from .profile, but bash gives you more choices.

Instead, he put the line that called his script in .bashrc and that's what caused all his problems. Bash will run .bashrc when you login, but it also runs it whenever a new bash shell is launched- which is just what happens when you run a script.

Try this on a Red Hat system (you won't be able to duplicate this on a SCO system or even a BSD system- it seems to be specific to Linux):

Create a script in your home directory called "t".

Now edit your .bashrc to add these lines:

until you interrupt with CTRL-C. Change the "t" script to:

and there will be no loop. That's because even though /bin/sh is a link to /bin/bash, bash acts differently when it is called as sh: if it's interactive it will ONLY look for .profile, and, interactive or not, it will never run .bashrc. The solution, of course, is not to put "#!/bin/sh" at the top of the script- the line that calls it should be taken out of .bashrc and put in .bash_profile. The .bashrc file should be used for variables and aliases that you want set to a known value when you run a script or start a new shell.

This seems to have been fixed with more recent bash. See Don't ever change, baby

Syncing in Tiger
Easy Mac Backups
Your iPod: Beyond the Music

Many of the products and books I review are things I purchased for my own use. Some were given to me specifically for the purpose of reviewing them. I resell or can earn commissions from the sale of some of these items. Links within these pages may be affiliate links that pay me for referring you to them. That's mostly insignificant amounts of money; whenever it is not I have made my relationship plain. I also may own stock in companies mentioned here. If you have any question, please do feel free to contact me.

Specific links that take you to pages that allow you to purchase the item I reviewed are very likely to pay me a commission. Many of the books I review were given to me by the publishers specifically for the purpose of writing a review. These gifts and referral fees do not affect my opinions; I often give bad reviews anyway.

We use Google third-party advertising companies to serve ads when you visit our website. These companies may use information (not including your name, address, email address, or telephone number) about your visits to this and other websites in order to provide advertisements about goods and services of interest to you. If you would like more information about this practice and to know your choices about not having this information used by these companies, click here.


My Troubleshooting E-Book will show you how to solve tough problems on Linux and Unix systems! 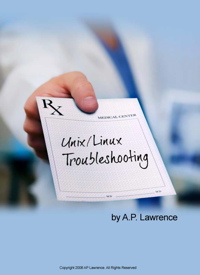